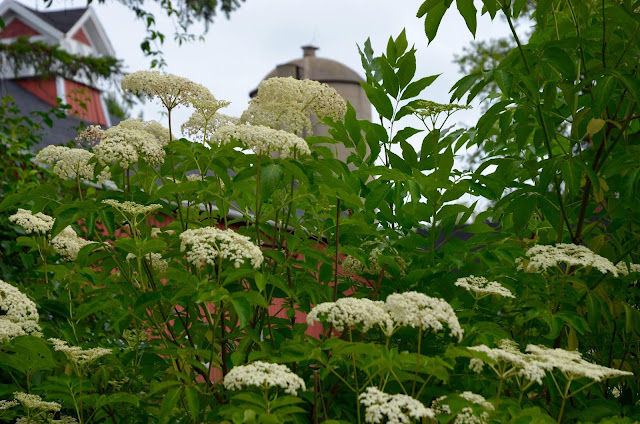 As we have had a tremendous amount on our plates so far this summer, I have been remiss in posting.  I hope that as we move through the height of the garden season, that I can keep up! :)  The promise of mid-summer abounds with the garden in full swing and beginning to deliver.  The above elderflowers are about to make their way into mead.  B has not done a batch in a few years and instead of foraging for the flowers, the ones we planted long ago are starting to produce in spades. The sugar snap peas (foreground) and the sunchokes (back) are beautiful.  The sunchokes, our first year with this perineal, are almost as tall as B right now.  The peas, as quite typical for us are so robust we cannot keep up with them.  Shaded in between the two at ground level is a patch of endive. The summer squash are well on their way and we should be harvesting our first full size napa cabbages this weekend.  Brussel sprouts, broccoli and storage cabbages are also well on their way.  We wil
Post a Comment
Read more 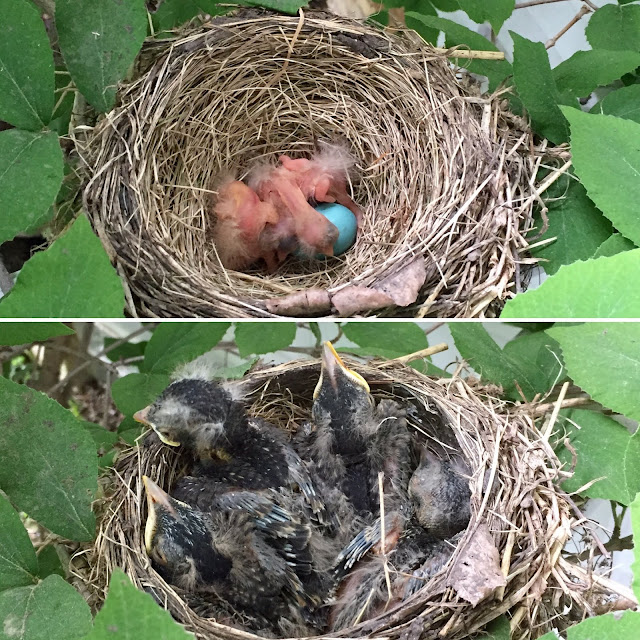 It never ceases to amaze me how quickly time can get away from us.  It has been a busy month with spring sports, wrapping up school, and having family in town visiting.  I cannot believe that it is June already; each day has been full.  Much like the baby robins above have matured rapidly in just one week, t ime has flown in the blink of an eye.   My free moments have left me tongue tied of late and been more for quiet reflection while basking in the abundant sunshine and reading the words of others rather than formulating my own. The weather has been amazing and the garden is humming away. This weekend we will seed the remaining summer crops.  B purchased 60 feet of mining conveyor belt which he is re-purposing into circular raised Mellon and squash beds. B has also been working on a solar heating system for the pool which is just about finished and should work wonderfully.   Our chicks are set to arrive just prior to mid-month and I look forward to raising a new f
Post a Comment
Read more 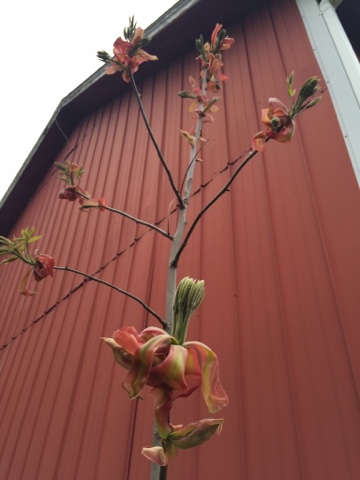 Though our weather is winter coats one day and t-shirts the next, the longer days have made the early garden very happy.  One of the baby hickory trees burst all of its buds on Friday. We were able to begin transplanting the cooler weather crops from the basement into the garden.  Both Storage and Napa Cabbages, Brussels and Broccoli went in and then were quickly row covered to aid against the dreaded root-maggots that can plague these crops.  We began the early row cover last season and our plants were all beautiful and healthy, so we are hoping for similar success this season. The peas are all emerging.  B planted them extra thick so that we could have some to add extra sweetness to our spring salads. The horseradish is peeking through (foreground) and you can glimpse the ever giant mega rhubarb in the background. B gave the girls expanded access to new pasture on Friday.  They were a bit reluctant to cross the line where the fence was previous
1 comment
Read more 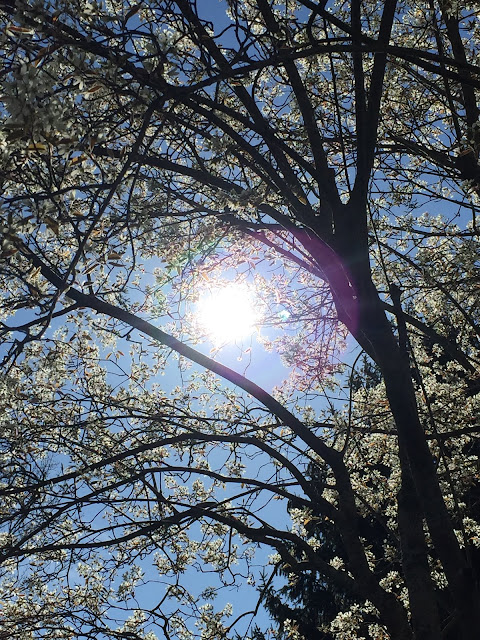 This time of year things change so quickly.  We had rain all weekend, and the long sustained drink coupled with longer days have the flowers blooming and the pollen flying.  More and more we are starting to work on outdoor tasks.  The pool has been opened, chemicals adjusted and now just needs a good cleaning.  Unfortunately some four weeks later we are still waiting to hear back from the contractor who is bidding our deck.  Hopefully this project can still be completed this season. We had our first asparagus with supper last night and the spinach is robust.  Sidney found a fantastic recipe for a asparagus, spinach and fennel soup that was delicious!  Everyone loved it, except the boy who grumbled at the vegetable based meal (there was sausage on the side for his benefit), but I did notice that despite his grumbles, every drop was eaten. More and more there is green in the garden, and the flats in our grow room in the basement are just bursting.  We know we must remain
Post a Comment
Read more

Z is for Zen #atozchallenge 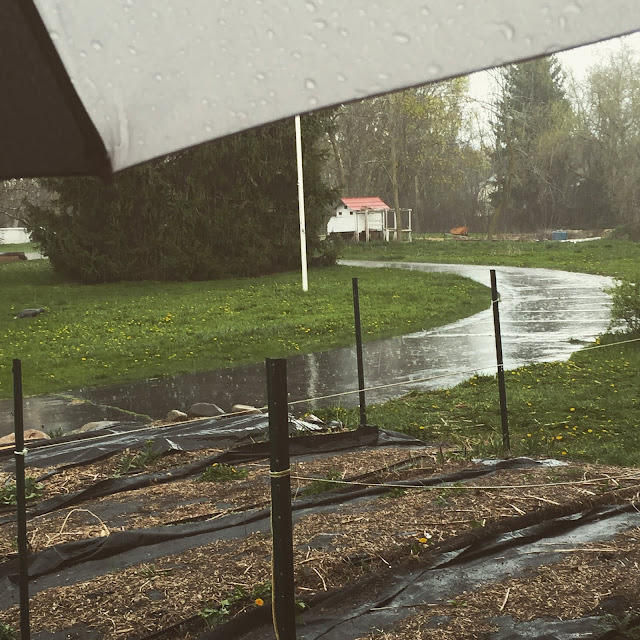 As April draws to a close, this teeter totter that we have been on, while still rocking seems to be finding some homeostasis.  Much like the crazy fluxes of our Wisconsin weather, as my lilacs start to open and the peonies send robust shoots up, there is the hint of soon a warming into Spring.  The expected rain is starting to fall and going over the list in my head is not a stress, it is simply that, a list, that I know will get accomplished in due time.  As I close out this A-Z Challenge I do so in a moment of Zen, one that I will hold onto as long as I can and hope to be able to tap into and return to when needed.
3 comments
Read more

Y is for Yawn 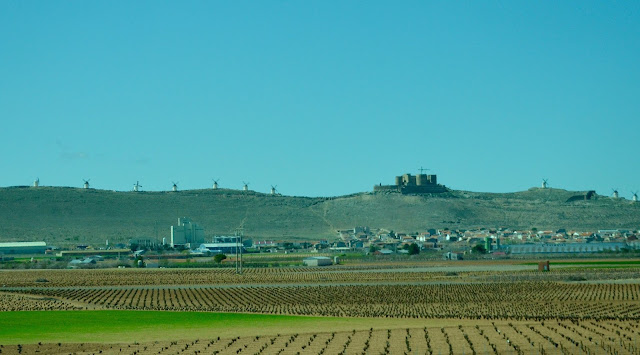 the windmills of La Mancha, Spain The week is winding down, and though a busy weekend awaits, it is a good outdoor kind of busy with soccer games and garden and household tasks.  Maybe it will be intermixed with a family game or movie, some reading and grabbing a bite to eat out.  Even a busy weekend is a relaxing change.  It is less regimented by the work and school requirements of the week, and there are fewer have to get done's.  Tomorrow also marks the end of this Blogging A-Z challenge, and with that, I can stretch out stifle a little yawn and relish in a writing undertaking completed.
1 comment
Read more

X is for Xander #atozchallenge 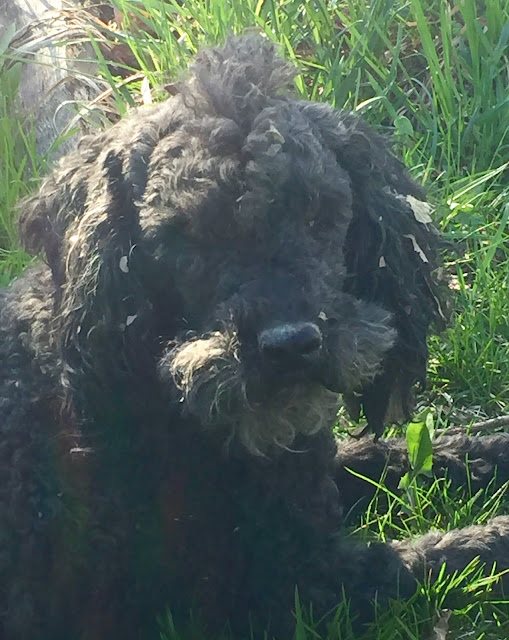 Whew, X was a tough one, and I was scrambling a bit, until my mom said "what about Xander"!  Well there it was.  This is Xander, our overly confident 18 pound farm poodle. We work closely with a wonderful rescue organization at work and he was evacuated from a puppy mill.  At 10 weeks old B did heart surgery on him to close a hole in his heart and from that time on, he was ours.  He has always been full of energy, and like many smaller breed dogs, thinks that he is three times his size! He never shies away from keeping the livestock in line or running the fences on patrol :) Several years ago Xander was also diagnosed with Addison's Disease, which in a nutshell, is adrenal gland failure, is little body cannot keep up with cortisol production so he does not deal well with stressful situations.  He is managed well on medication and for the most part, certainly does not let anything slow him down.  In our household,  he bosses around Emerson, our boarder collie, but is
2 comments
Read more
More posts